Saddleworth Stars Nursery named as the best nursery in the world

Saddleworth Stars Nursery in Scouthead has picked up the award for the best overall nursery in the world. The decision was made by the National Day Nurseries Association judges. 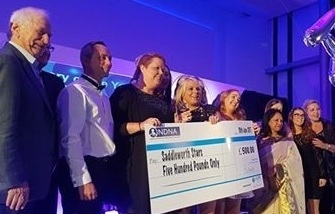 Before going on to win the award for the overall nursery of the year 2017  Saddleworth Stars also beat hundreds of nurseries from the North.  They were also met with tough competition from nurseries in Dubai, Abu Dhabi, England and Scotland. In order to win this award votes from parents and comments about their experiences were shared, as well as a visit from an inspector sealed the decision to be given this award. The report from the inspector was shared with the international judging panel, who then made the final decision. The award was presented at Old Trafford by TV’s Johnny Ball

Each and everyone at Saddleworth Stars is over the moon with this recent achievement.

Nursery Opens 24hrs To Help Parents There has been a call for twenty-four-hour nurseries to be rolled out across the U.K. as parents struggle to find childcare. With … END_OF_DOCUMENT_TOKEN_TO_BE_REPLACED

How music can help children's development The benefits of music are enormous; both consciously and subconsciously music is a part of our everyday life. Children are … END_OF_DOCUMENT_TOKEN_TO_BE_REPLACED

How to support children's communication From the outset it is second nature to support a child’s communication; parents often do this without thinking. Talking and … END_OF_DOCUMENT_TOKEN_TO_BE_REPLACED

How Playmobil can capture children's imagination Playmobil has been capturing children’s imaginations for over forty years. Hans Beck came up with the idea back in 1967 … END_OF_DOCUMENT_TOKEN_TO_BE_REPLACED