How Playmobil can capture children’s imagination 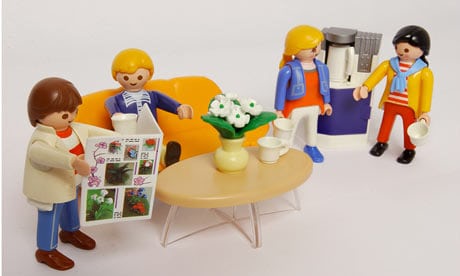 Playmobil has been capturing children’s imaginations for over forty years. Hans Beck came up with the idea back in 1967 all pieces are interchangeable and to scale (1:24) figures are seven and a half centimetres tall.

They haven’t deviated from these scales from day one so old pieces from forty years ago would not look out of place with today’s sets. There are around thirty different play worlds for children to enjoy from schools to fairies and police to pirates with historical and modern play themes there is no limit to where your child’s imagination will take them.

In his early career, Hans worked for German toymaker Horst Brandstatter. Playmobil is based on everyday themes that a child would find in their everyday life making play more enjoyable. With excitement building around the royal wedding of Prince Harry to Meghan Markle on the 19th May Playmobil have released a whole range of wedding themed characters with a limousine, chauffeur, bride and groom flower girl and photographer.

Playmobil is an internationally award-winning product that is well known by all generations for their premium quality.

Since its launch in 1974 three billion figures has been produced and sold in over one hundred countries. Playmobil now has four exciting fun parks for fans to enjoy in Malta Paris Germany and Greece and is the major sponsor at this year’s Gloworm festival at Thoresby Park on the 18th to 19th August 2018.

New nursery to open in Halstead Parents in Halstead are celebrating the news that a new nursery is to open in the thriving town community of Halstead. Richard De Clare … END_OF_DOCUMENT_TOKEN_TO_BE_REPLACED

Nursery Opens 24hrs To Help Parents There has been a call for twenty-four-hour nurseries to be rolled out across the U.K. as parents struggle to find childcare. With … END_OF_DOCUMENT_TOKEN_TO_BE_REPLACED

How music can help children's development The benefits of music are enormous; both consciously and subconsciously music is a part of our everyday life. Children are … END_OF_DOCUMENT_TOKEN_TO_BE_REPLACED

How to support children's communication From the outset it is second nature to support a child’s communication; parents often do this without thinking. Talking and … END_OF_DOCUMENT_TOKEN_TO_BE_REPLACED